When to be hard on yourself as a performer 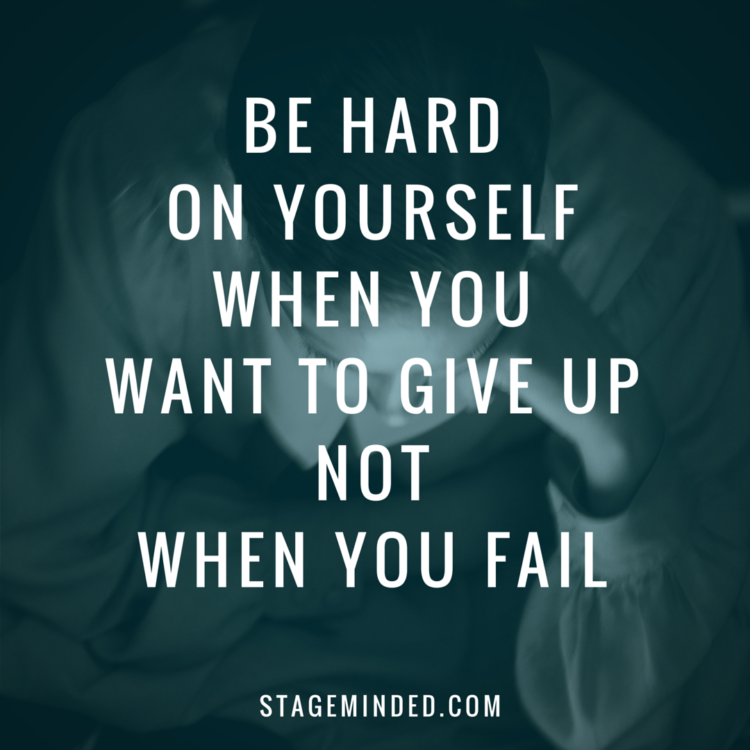 So, last week I shared this post on social media that resonated with a lot of people:

Most performing artists I know are hard on themselves… when they make a mistake, when they miss out on an opportunity, when they let their teacher down, when they don’t get picked for something… essentially any situation like this gets labelled as “failure”.

And in these cases, performers replay in their minds what they coulda, woulda, shoulda done differently, better, perfectly… they tell themsleves how dumb they are and get really, really hard on themselves.

But this is the wrong moment to be hard on yourself.

When you’re hard on yourself for failing, you are essentially saying it’s not ok to fail. But failure is an essential part of learning and progress.

It’s a sign you’ve been putting yourself out there, stretching your comfort zone and working to the edge of your ability… which is actually a very admirable thing!

Yes, there’s the disappointment of not quite making it, but if you allow yourself to be disappointed and get on with it, you’ll be a lot better off than if you’re hard on yourself.

When you “fail” or things don’t work out, do what you need to do to be encouraged, comforted and nurtured back into your (hopefully) usual state of confidence.

That way, your motivation going forward isn’t based on this intense need to prove yourself (and all those other ugly negative frames of reference we use to push ourselves onward when we fear failure!). Instead its based on confidence, and a genuine desire to reach your goals, and not let setbacks set you back.

That’s the moment when most performers draw the conclusion that whatever failure you’ve made is unforgiveable, whatever challenge coming up is insurmountable, that you are a terrible singer/dancer/actor/musician/performer so you might as well cut your losses and give up now…

(am I the only one who ever felt like this??)

At that moment when you want to give up, it’s not the time to settle in and wallow in your own private pity party… that’s the moment when being hard on yourself is actually useful!

Giving up will only reinforce the usually exaggerated conclusions you’ve drawn about yourself and mean you have less confidence next time you face a challenge, so you’ll be more likely to cave under pressure and you’ll probably regret it later.

You don’t want that.

So, find that part of you that’s hard on yourself and use it (in a good way!) to keep you in action mode.

Is there ever a time when it’s a good idea to give up?

Now, when I talk about being hard on yourself when you want to give up, I’m not saying you should never quit a job you hate or stop pursuing a career path that you decide isn’t right for you.

That’s not giving up (at least not the way I define it). That’s being intelligent, looking after yourself and taking your future into your own hands!

Not everyone will make it in the entertainment industry and as someone commented recently on this post in facebook: “Sometimes it takes more strength to give up when it’s the best option!”

I agree. And yet, even if you do “give up” your serious pursuit of your artform, you never stop being an artist. It’s part of you and it will stay with you long after you hang up your pointe shoes or drum-sticks or sheet-music…

So, quitting doesn’t mean you give up on being you. It just means the form shifts a little and works better for your in this stage of your life.

P.S.  If you want to learn more about how to respond to mistakes, failures, criticism & competition as a performer, check out Mindset School.

Don’t let self-doubt hold you back from your destiny.